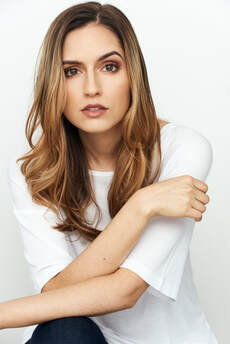 The "gorgeous and super-talented Paredes" was ranked #18 on a list of 70 Most Beautiful Women of 2019. Asta is humbled to be included in this list from Master Gio among starlets like Zoey Deutch, Samara Weaving, and Jessica Rothe. 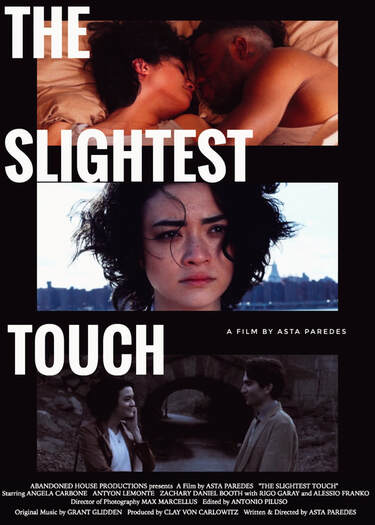 "The Slightest Touch is undeniably intense and superbly moving" - VM's 5 REASONS TO SEE ‘THE SLIGHTEST TOUCH!’

​"The Slightest Touch attests to her [Director/Writer Asta Paredes] immeasurable talent and drive --  and will no doubt start a dialogue with audiences."  -Villain Media

"[Angela's] performance captures her undeniable charisma and dynamic personality —  in a role that has a cause and message that is very close to Carbone’s own heart." -Jorge Solis

​"Paredes is not just attacking a rapist [with The Slightest Touch], but tackling the culture that has created such a predatory environment for women." -Review Fix

"Asta had a story [The Slightest Touch] which, through telling it, could be restorative and progressive for herself and a large community of women." -Angela Carbone
​

By popular demand, Abandoned House Productions has released two of their acclaimed short films into the YouTube universe! 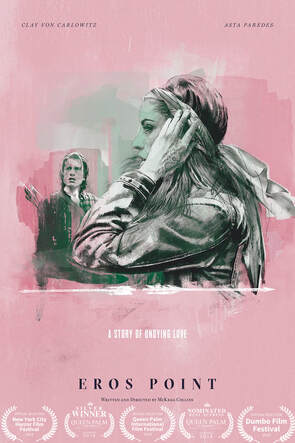 EROS POINT: A Story of Undying Love  is now online and can be viewed on Vimeo  here.

​See what the critics are saying:

"Paredes nails an emotional performance. With two charismatic leads, Eros Point: A Story of Undying Love cleverly uses its post-apocalyptic setting to focus on the emotional arc of this tragic couple." via Villain Media

​​"Both Paredes and von Carlowitz do an amazing job with their performances and I love the way the narrative flashes back from more happier times to the tragic present... [reminiscent of] A Ghost Story. "
​-Vern's Video Vortex

"While this may not sound like it has the makings of an indie horror short, Collins takes Eros Point in some unique directions...the film [has an] interesting story and involving cast." via The Independent Critic

" ... well-orchestrated chemistry that’s hard to miss. ‘Eros Point’ is worth its time, and is a recommended short for those interested in unusual love stories." via Indie Shorts Mag 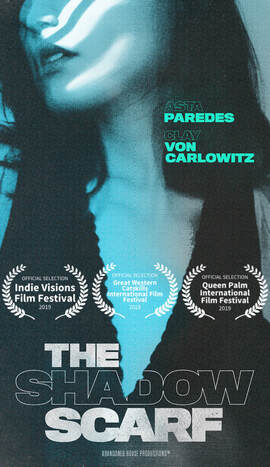 View the film on Vimeo here.
&
See what the critics are saying:

"Everything about 'The Shadow Scarf' is hypnotic...(reminiscent of David Lynch in the best way) " "...haunting and lovely..this is Aurora casting her spell, and we, like Jeffrey, are hypnotized." via F This Movie!

"Bathed in reds, it carries a reminiscence of the 1977’s Suspiria but ‘The Shadow Scarf ‘is at once, both; spooky and mesmerizing...." "Asta Paredes is enigmatic as Aurora." via Indie Shorts Mag

"Asta Paredes [portrays] the femme fatale in...The Shadow Scarf [which] is by all accounts one of the best examples of modern film noir I have ever seen." via That Moment In.com 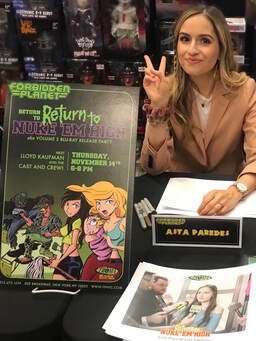 Asta had a blast at the 'Return to Return to Nuke Em High AKA Volume 2' Blu-Ray release party hosted by Forbidden Planet on November 14, 2019. She enjoyed seeing fans old and new while signing autographs at the fun event. In addition to buying the blu-ray at Forbidden Planet- you can buy the film on Amazon, Diabolik DVD and Troma Direct. 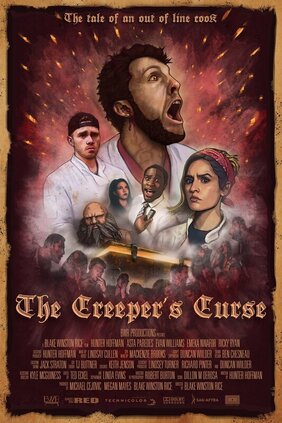 The official trailer for The Creeper's Curse is out!

Villain Media reports: "Get ready for something really comedic and scary thanks to the official trailer from The Creeper’s Curse, featuring Asta Paredes and Hunter Hoffman. Check out what happens when you cross the line with the wrong witch."

​Check out the trailer and write up here. 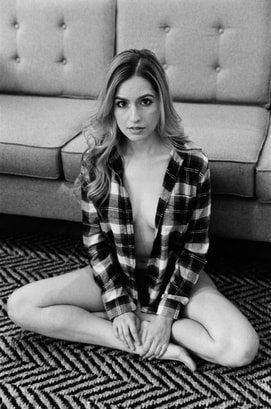 25 Petite Models Standing Up to the Competition

Asta is honored to be named on this list of models!

"The modeling industry has been dominated by tall women for years, but times are changing. Brands are searching for models that represent more than a small population of people. H Collective continually partners with clients who take pride in inclusivity.
​The Hub is full of talent- far and wide, tall and small;
here are the top 25 petite models to look out for."

The Creeper's Curse was celebrated with an extra special preview screening at Syndicated in Brooklyn on May 11, 2019.  Asta joined her cast & crew for two back to back screenings with Q & A sessions. Family and Friends mixed with the team to give TCC a good send off before a festival run. Stay tuned for updates on future screenings! 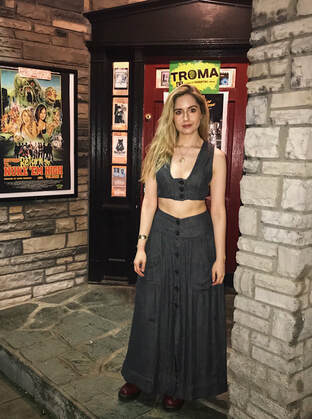 ​Asta attended the long awaited New York City Theatrical Premiere 'Return to Return to Nuke em High AKA Vol 2' at Film Noir Cinema April 26, 2019. Afterwards to a sold out crowd, she took part in a super fun Q & A with members of the cast and Director Lloyd Kaufman. The NYC Theatrical run is from April 26-May 2, 2019. 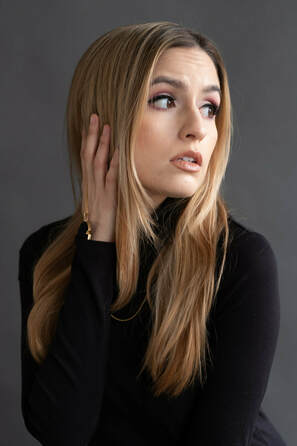 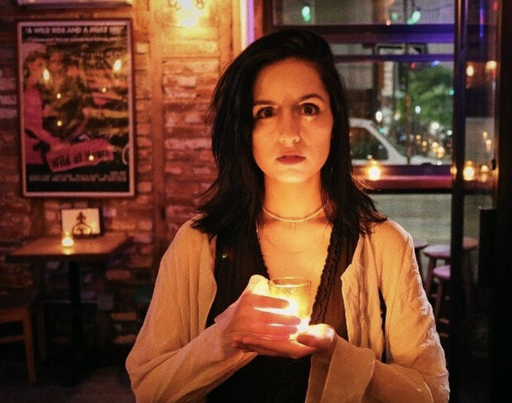 As THE SHADOW SCARF's leading lady and producer, Asta was honored to read this lovely piece by Patrick Bromley of F THIS MOVIE!
Here's a snippet:
​
"Everything about "The Shadow Scarf" is hypnotic, from the use of fog that rolls in and out to bookend the story (reminiscent of David Lynch in the best way) to the guitar and synth score by Grant Swift Glidden. The dialogue and delivery are stylized in such a way as to walk the line between reality and dreams. The characters do a great deal of talking, but rarely do they say what needs to be said -- namely, the truth. This is a story about what we conceal about the past, and how those secrets, like a fog, allow us to lie to ourselves and avoid facing who we really are."

Read the rest of the film review here. 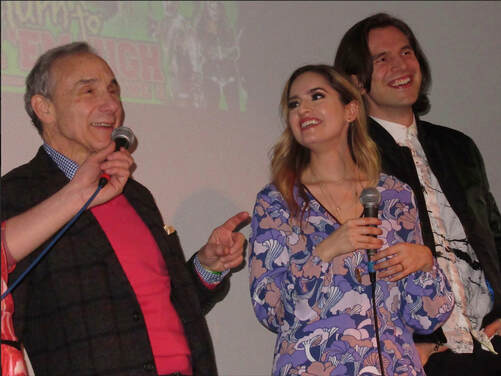 
​Thanks to PhilaMOCA , Asta caught a very special double feature screening of Return to Nuke Em High Vol 1 And Return to Return to Nuke 'Em High AKA Volume 2 with a lively Philly audience. She enjoyed answering questions and meeting new and old fans alike--It was also her first time watching the films back to back! 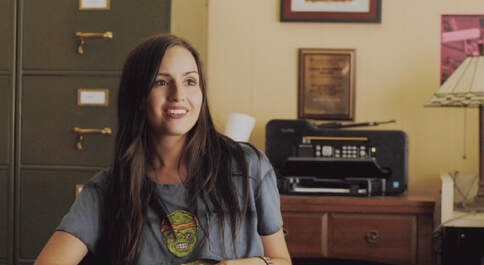 Check out Asta's chat with the folks over at Spook Du Jour about the upcoming release of Troma’s Return to Return to Nuke ‘Em High aka Volume 2  and all her upcoming film work on as well as off the screen. 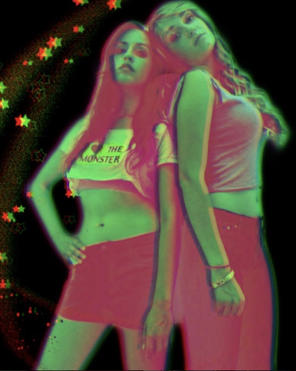 "After years of post-production, premiere screenings and promotions, Troma’s popular streaming service Troma Now is exclusively releasing the long awaited, critically acclaimed conclusion to the ‘Return to Nuke ‘Em High’ saga for rental and purchase on Christmas Eve, for $4.99 and $13.99, respectively. ‘Vol. 2’ is also playing in select U.S theaters now!"
​via TROMA.com 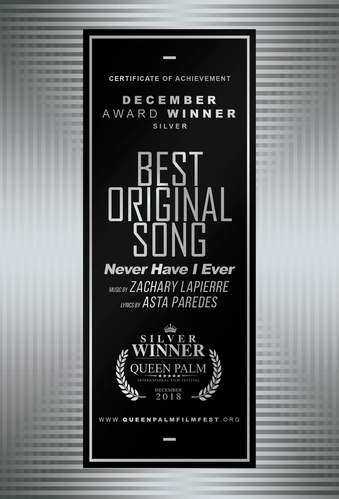 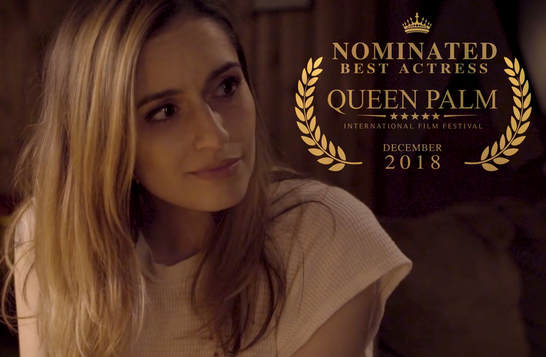 ​EROS POINT was selected as a December Crown Selection at the Queen Palm International Film Festival!  In addition, Asta Paredes was recognized with a nomination for a BEST ACTRESS award for her performance as 'Sarah'. She is honored to have been selected among such talented performers at this fest. 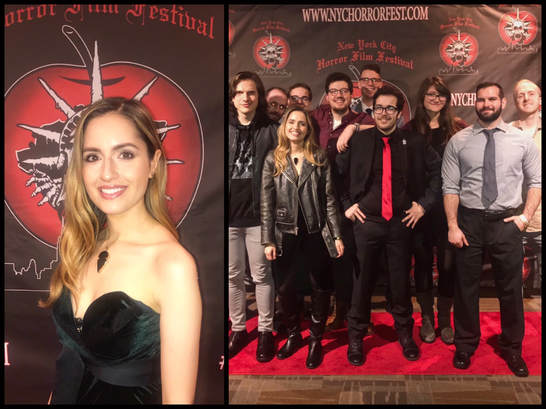 ​Asta Paredes attended the 16th Annual New York City Horror Film Festival at Cinépolis. There she met with filmmakers from around the world and celebrated all things horror cinema. She was especially ecstatic to meet horror legend Tony Todd, who was being honored with a Lifetime Achievement award at the fest. This was all leading up to the World Premiere of EROS POINT, for which she stars as well as worked as producer, on Sunday December 2nd. The Cast & Crew attended and were received warmly by a packed audience. Asta looks forward to sharing this film at more festivals in the future. 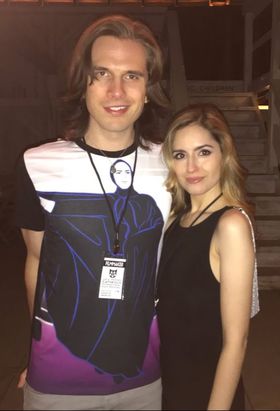 Sunday October 21, 2018 THE SHADOW SCARF had its festival premiere at the Great Western Catskills International Film Festival. Writer/Director/Actor Clay von Carlowitz attended the screening with Actress/Producer Asta Paredes at Wayside Cider. Following the screening they held a Q&A talking the beautiful chaos of indie filmmaking for their film which was made on premises of Videology Bar & Cinema. The pair enjoyed the weekend as guests of the festival to watch various indie films from around the world picked by Festival Director Lisa Wisely and Festival Programmer James Felix McKenney. 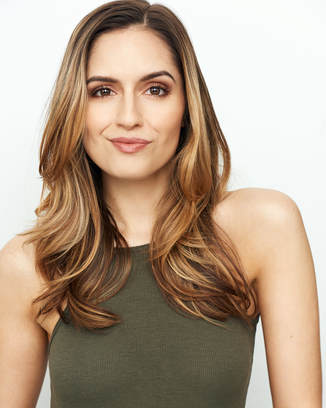 ​Asta is honored to be part of Day 4 of Trainwreck'd Society's Month of Horror Showcase of Interviews. Learn a little bit more about her performance beginnings, time with TROMA, as well as recent work on Eros Point, The Shadow Scarf, The Creeper's Curse & more.

​Check out the interview here!

The trailer for EROS POINT is live! Watch it on IMDB or on Vimeo. 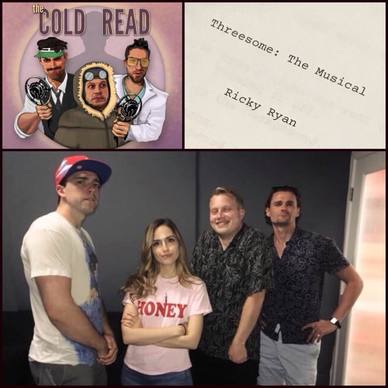 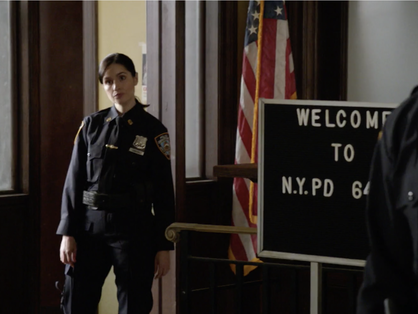 ​Season 3 Episode 4 "A Walking Shadow" of SHADES OF BLUE
was Asta's Co-star debut (aired on July 8, 2018) She appeared as Captain Pines' Assistant on the show. She couldn't be more excited to add this police drama credit to her resume! 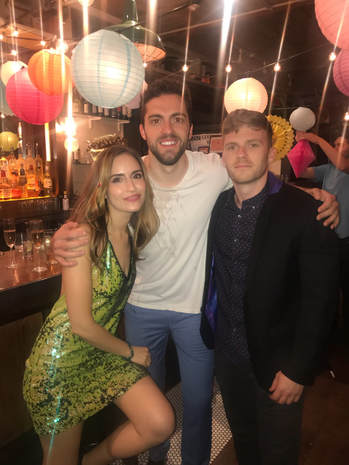 That's a wrap! Asta has had a hell of a time starring as 'Gwen' in comedy short THE CREEPER'S CURSE. Synopsis: "Handsy and ill-mannered chef, Roger, arrives at work on New Year’s day bearing a massive hangover. Coworkers Gwen and Marc realize that their colleague has been placed under a peculiar curse and begin working together together to break this most unusual spell. Together, the trio hysterically wrestle with what appears to be a demonic force inside of Roger, and comically keep it under wraps from their agitated boss. The Creeper’s Curse puts a comedic and fantastical twist on what could happen to a sleazy and ignorant male." via official site for the production which you can learn more about here. 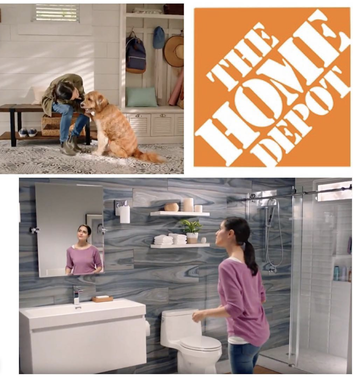 Check out the latest national commercial for Home Depot featuring Asta. It's recently hit the airwaves! It's playing now on all major networks and online here. 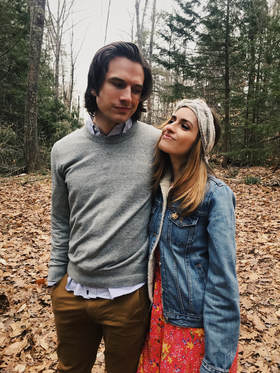 ​That's a Wrap on EROS POINT! Directed and written by McKegg Collins, this production is a joint one combining efforts between Asta's production company ABANDONED HOUSE PRODUCTIONS and fellow Brooklyn based company FITCH FORT FILMS.  Asta is starring alongside frequent collaborator/husband Clay von Carlowitz in this tense nature drama and also wrote an original song along with Zachary Lapierre for the film. 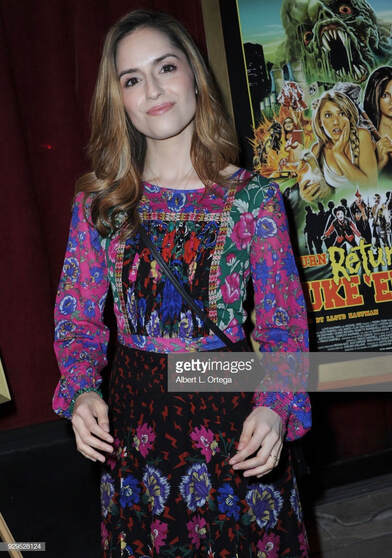 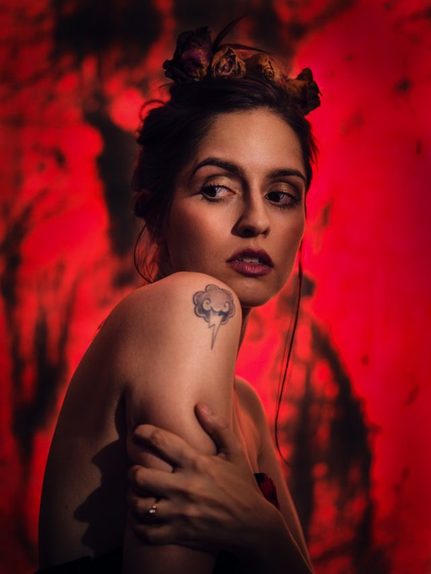 Asta had the pleasure of working with Filmmaker/Photographer Alan J. Carmona on a very cinematic hassleblad portrait shoot. This image was featured and published on Dark Beauty Magazine...and the publish date was on her birthday! 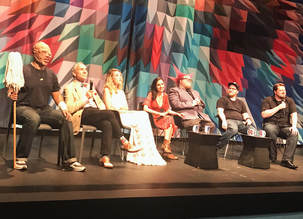 ​Asta attended NUKE EM HIGH DAY on Saturday July 15, 2017. A Day set up by the MUSEUM OF THE MOVING IMAGE celebrating the "Class of Nuke Em High" Franchise with a triple feature marathon. It all culminated into the NY Premiere of "Return to Return to Nuke 'Em High AKA Vol 2". Following the premiere Asta joined co-stars Catherine Corcoran & Zac Amico, writer Travis Campbell and the legendary auteur Lloyd Kaufman for a Q & A panel moderated by John Brennan. 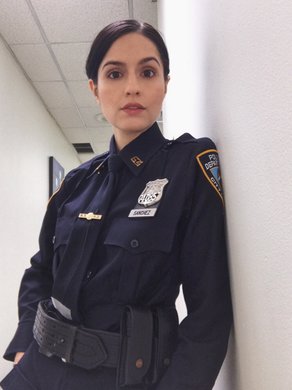 ​Asta just wrapped her first co-star episodic booking. (Yay!) Fresh off of the Jennifer Lopez led police drama: SHADES OF BLUE, she makes an appearance as Captain Pines' assistant. You can catch Asta in Season 3 Episode 4.
Stay tuned for airdates!